Here I am. In a different country, about to head to another. It’s actually my last night in Berlin, and I’ve had an awesome time here. I’ve had the best Turkish food I’ve ever eaten, seen some pretty excellent stuff, and had some old German guy have a go at me. I think.

Having a night flight, I had the whole day to prepare. Which is lucky, since I’ve always been a procrastinator. It’s not my fault, I always get things done and where I need to be, it’s just how I work best.

So it got to abouttttt 2pm and I thought I’d better pack. My incredibly cute mother decided she’d come to Sydney to drive me to the airport. After our fight about money pouches, we took some selfies…(togetheries?) but she’d kill me if I posted them, so here’s an artist’s impression. 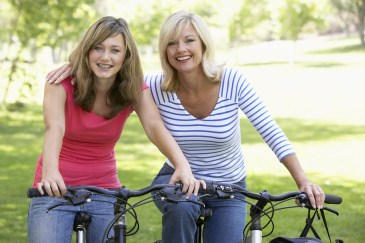 Anyway, I got to the airport, realised I didn’t know how to do life, waved goodbye to Mum, cried (what) and went into the customs bit.

As they started to board, Coldplay’s ‘Sky Full of Stars’ came on over the general Sydney Airport radio. I didn’t know whether it was an incredibly poetic moment, or just a reminder of how much I hate that song. But nonetheless, I was feeling pretty sick and this didn’t help.

And there I was. On the plane.

Sitting right next to the toilets. And right behind business class. 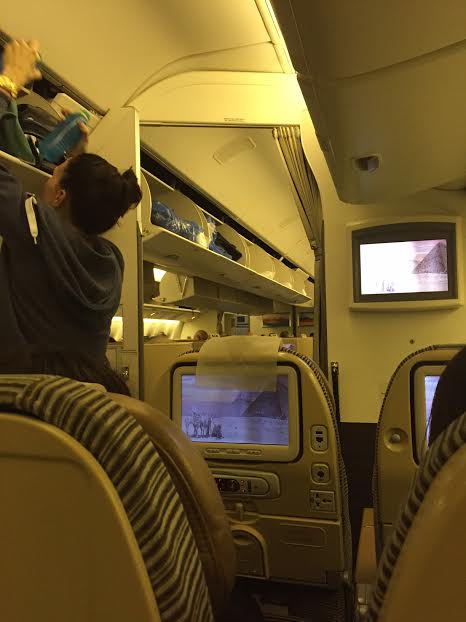 But it wasn’t all bad. In fact, it was quite roomy. And my entertainment worked, which is always a plus. It turns out that my neighbour’s headphone jack thing was messed up and she couldn’t watch anything… which would absolutely suck… but the flight attendant was very apologetic and found her another seat. Alas, she didn’t like it.

This resulted in her returning to her seat next to me, taking a lap of business class, and then asking to be upgraded to first class.

Other highlights from the flight? The little kid sitting with her parents and baby brother who projectile vomited all over the walls and carpet probably wasn’t one. But the free-poured vodka soda wasn’t so bad.

Talk about being in a daze. I had a 3-hour wait at Abu Dhabi, and it was pretty uneventful. I did however find a Hungry Jacks/Burger King, and had my first very bogan culture shock. 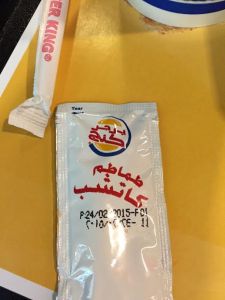 I of course, kid.

Oh, if you want a cigarette there, you have to go inside these creepy claustrocubes. 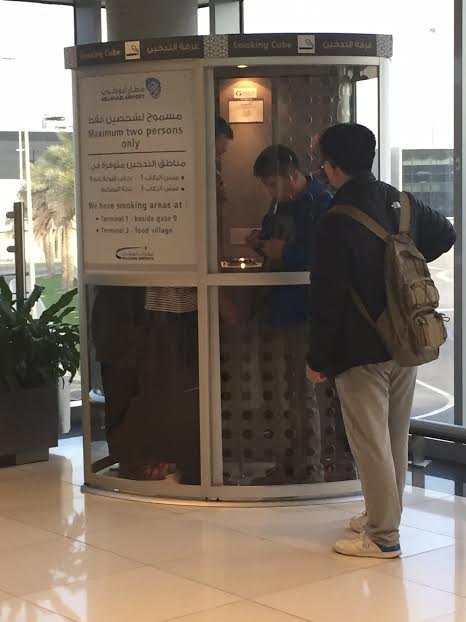 Man I tell you something though, that airport is not messing around with the décor. 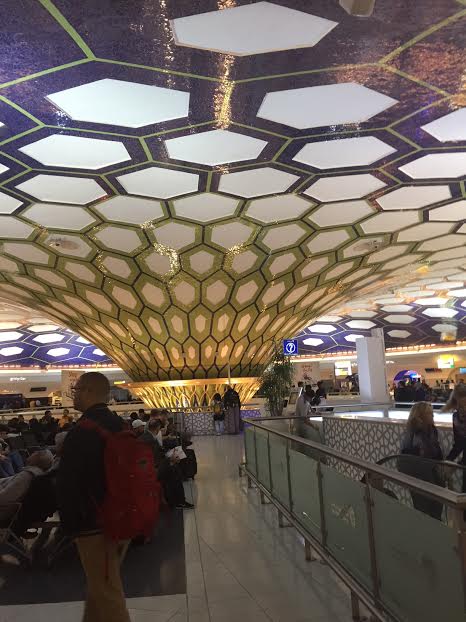 At this point I was preeeettttyyyyy grumpy. We got herded onto some buses and taken out to our plane. It felt like ages away, but at that point I was two-Xanax-down and ready for bed.

I found my seat – next to a fantastic gal named Johanna – who I ended up hanging out with in Berlin. She said she was grateful I wasn’t a child, and I said I was glad she wasn’t a psycho. It was friendship at first six-and-a-half-hour-journey.

When I wasn’t chatting to Johanna, or trying to figure out what “Ausgang” means (it’s Exit guys), I played the incredibly insulting Airberlin quiz, which was on your entertainment screen. 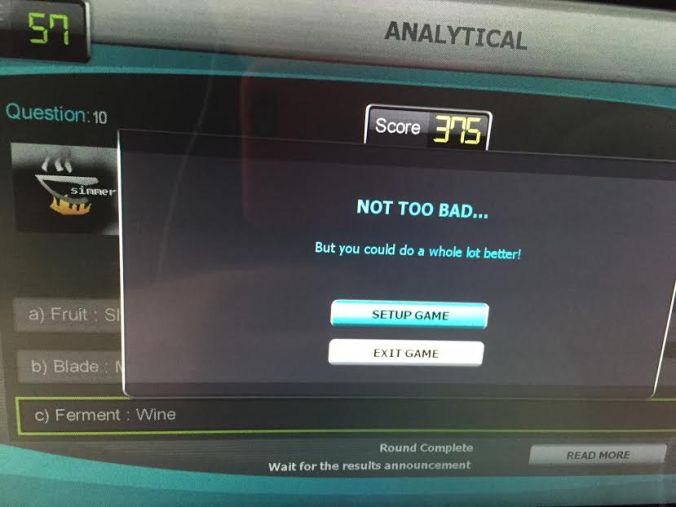 Um, rude?
I’m tempted to send this shot as feedback to Airberlin about them as an airline.

Little did I know…

The catering on Airberlin was a sign of things to come. I’ve learned that Berlin is many things, but it is lactose-intolerant-intolerant. 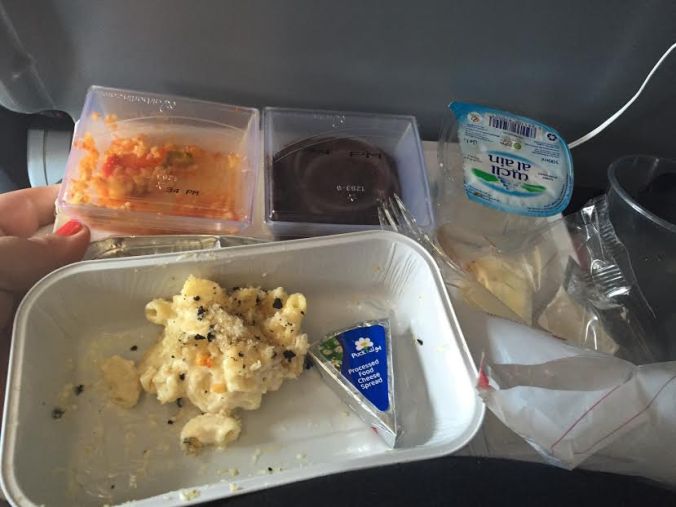 (Not pictured: the buttered bread roll I ate first. This is what was left – mac ‘n’ cheese, cheese, chocolate pudding, and some other salad with cheese.)

Anyyyyway, it was a pretty good flight in all. One of the highlights? Flying over the Middle East. The camera obviously doesn’t do it justice, but we had some amazing views. This is somewhere between Hamadan and Mahabad in Iran. (I checked on the in-flight thingy, I didn’t just guess.) 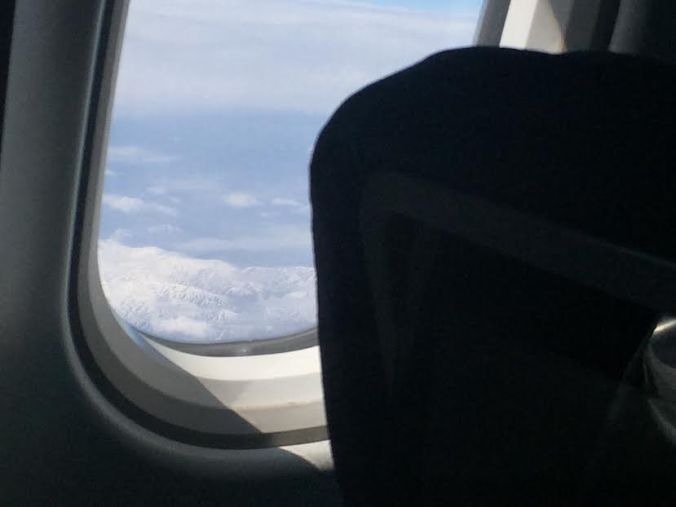 And with that, some hours, some crying bubs, a guy in suspenders, and a sweeping view of gingerbread-style houses we landed in Tegel Airport, Berlin. 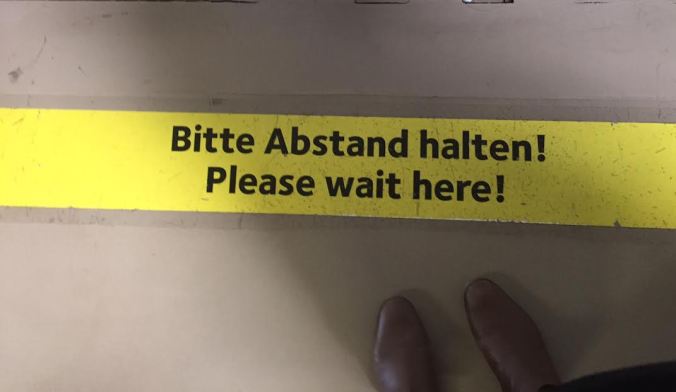 I briefly spoke to the immigration officer after this, who had few teeth but many words to say about the German v Australia football match that was to be on that night. He was cool. He was mocking me, but he was cool.

And with nothing to declare, I was in a cab on the wrong side of the road on the way to Rosenthaler Platz… completely delirious.

Six hours on a train tomorrow to Amsterdam – a Berlin post to come!