I did mention that I’m not fluent in German, didn’t I?

English speakers are lucky in Berlin. If you don’t speak German, and the Germans say they don’t speak English – what it means is, “I’m beautifully fluent in English but have to pause for a second occassionally to make sure I use the correct word.”

So when I genuinely encountered someone who didn’t speak any English (or at least thought it would be fun to make the tourist play a game of charades), I actually froze. It wasn’t a good look for me. All I was trying to do was ask for a bottle of water, and it sort of ended up looking like I was trying to direct a plane in. Then I gave the guy a thumbs up.

I never returned there.

Another language barrier moment for me was when I was desperately lost and looking for a way in to a U-Bahn station.

I found a lift, and pressed the down button (riveting stuff) and then this older big bald German man came up, stood in front of me, started talking to me really angrily (Germanly?) and pushed me away. I’m not sure what I did, but once he’d done that, he looked at me, said “DANK-E” closed the lift doors, and went down as I stood there totally bemused.

It was a special moment. One I’ll truly treasure.

Schnitzel as an artform.

My beautiful friend Edith, who I’ve mentioned before, had an exhibition on while I was over there. Unfortunately, I couldn’t get any pictures of her work that would do it justice so I won’t post them here – but go check out her stuff.

Anyway, an honourable mention as part of that exhibition needs to go to this schnitzel, which was nailed to the wall.

Even the curator was talking about how much Germans love schnitzel. Now we have proof. ^

I already mentioned my plane friend (plane, not plain), Johanna. On the Friday night I was there, we went to Flow Bar where her amazing friends were working, and what a night. There was a smoke machine. There were ’90s dance anthems. There were defunct Nokias set in resin. It was heavenly.

I’m not sure if I’ve made my policy on schnapps clear – and it’s that I truly believe it makes people cranky when they drink it. But the enthusiasm of these particular Germans, who I wanted to adopt and bring home with me, was that you can’t have enough. It’s called Berliner Luft, and it’s minty / amazing.

(Excuse the blur. Too much Berliner Luft?)

Despite everything else I saw, Berliner Mauer / The Berlin Wall art really was amazing.

These were taken at the East Side Gallery. I have several (hundred) more pictures, but anyway, here’s a quick look. 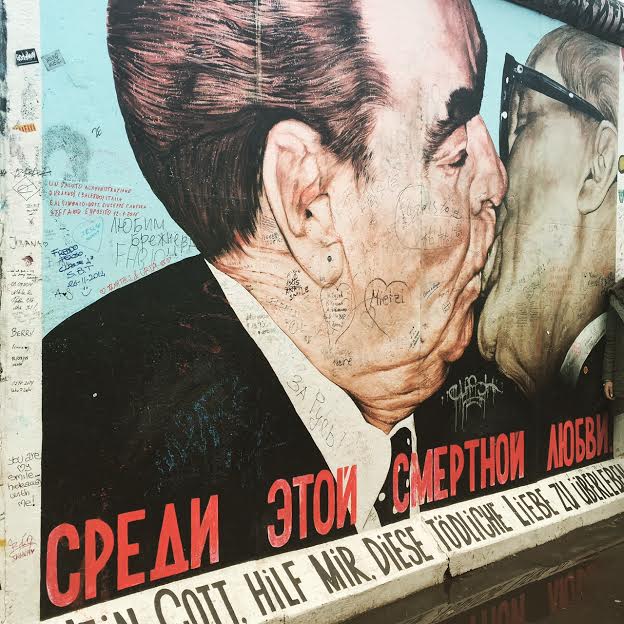 It’s one of those sites that while yes, has been restored several times, it’s still very much in tact. There’s something really nice about that, and the fact that it’s such a large, open-air gallery.

So in summary, from the people to the sights, and from the markets to the amazing U-Bahn, Berlin is an amazing city. And I’ll definitely be back.

Next stop: Amsterdam (As recounted from Paris, sheesh).